Downhill skiing was very successful, Slalom was widened and then two new hills were opened for the 1945-46 ski season, Morning After, and Malcolm MacDonald.

I can’t see to pin point where Morning After was but we all know where MacDonald is and his story is quite suitable to share on Valentine’s Day.

Malcolm MacDonald (1901-1981) was a British politician and diplomat who worked closely with Mackenzie King. He was an avid downhill skier and ended up finding love on the slopes.

Here is his story: 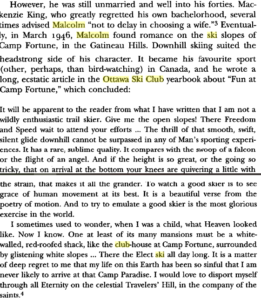